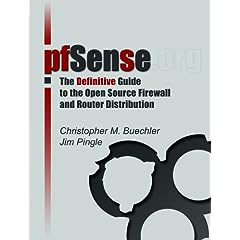 This book is designed to be a friendly step-by-step guide to common networking and security tasks, plus a thorough reference of pfSense’s capabilities. The Definitive Guide to pfSense covers the following topics:

The first review of the book is out now.

Congratulations to pfSense for their 5 year anniversary.

Dru Lavigne is currently working on a book on PC-BSD: Definitive Guide to PC-BSD

I’m about 2/3 of the way through book #3 on BSD, tentatively titled “The Definitive Guide to PC-BSD”. This book will be through Apress, and I’m excited that it will include a live DVD of PC-BSD 8.0 so you can follow along as you read it. The book is designed for users new to BSD up to existing PC-BSD/FreeBSD power users. Think of it as the type of book new users can grow into while existing users can still find nuggets of “I didn’t know that”. I’ve also concentrated on the importance of community–a concept new users aren’t used to and most tech books never mention.

Here is the Table of Contents: